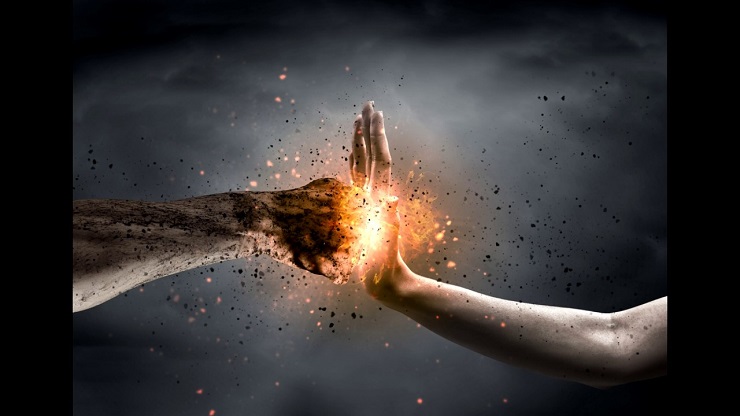 If one eats meat, in a place where majority abstain from taking it, would that person be liable to punishment? What if one takes part in a protest for more Democratic space, which has been proscribed by the Government, is that person justified in his/her cause? Are the police justified to kill in the commission of crime so as to protect innocent lives, with many viewing taking of another life no matter the situation as wrong?

The above questions test our very fundamental values & principles as what is considered Immoral by others is legal according to the Laws of the land, and vice- versa.

Thus creating a thin line between Morality & Law, sometimes so thin that is indistinguishable from the other, even some consider them interdependent. But in varying circumstances, the line is clear with each governed by its own values & principles.

According to Collins Dictionary, Morality is the belief that some behavior is right & acceptable and that the other behavior is wrong. In broader terms is a system of principles & values concerning people’s behavior, which is generally accepted by society or by particular group of people.

Then if one eats meat in a place where majority abstains from it due to their beliefs & principles, he/she will be considered immoral. Another example is if one engages in pre-marital sex, in a society where marriage before sex is a taboo, then they’re also immoral.

By committing such taboos are we liable to be punished, is there any basis to punish those who have gone against the accepted norms set by the society. To be fair, these are principles that have guided our society even before our Grandparents were born and served as a yard stick for generations.

According to Wikipedia, Law is a system of rules that are created and enforced through social or governmental institutions to regulate behavior or in broader term a system that regulates and ensures that individuals or community adhere to the will of the state.

Hence, if one takes part in an unlawful protest, no matter how right the reasons are or align with their innate beliefs & principles e.g. agitating for more Democratic space in a country. They will face the full force of the law as enshrined in the constitution and enforced by relevant institutions.

But if one takes meat in a society where it’s a taboo, the person will be wrong according to the society but legally right to the law or engages in pre-marital sex, the situation will still be the same.

In some cases, what is morally wrong in the society can also be illegal, for example in Islamic societies engaging in pre or extra- marital affairs is not only a sin but also illegal with punishment meted in line with the Quran. In such societies, it’s hard to distinguish between Law & Morality as our Moral Compass forms the basis in creating Laws that govern us and enforced by Institutions.

Some have gone further stating the majority of laws passed are indeed guided by our Moral value, which is true, for example what has been considered generally wrong by the society e.g. public nudity can be enacted & passed into law prohibiting such behavior with Consequences if violated.

In such a scenario, there’s no line to distinguish between Law & Morality as they are interdependent and one serve as a basis in the formation of the other. Good examples are countries with State Religion e.g. Islamic countries like Iran, Pakistan where Sharia law based on the Quran forms the foundation of laws enacted by the Government.

But in modern Western Democratic countries, there’s a clear line between Law & Morality and are independent of each other. For example Abortion is a taboo in many societies and laws enacted outlawing it. In the west, the Rationality of Law takes precedence and the mother has the Right either to keep or terminate the pregnancy. Hence emphasis is on the Rights of an Individual than the collective conscience of the Society.

Just as the saying goes another man meat is another man’s poison, in Law & Morality what is considered morally wrong in one society is legally right in another and vice versa. The thin line is what keeps them from clashing with each other in matters of Values & Principles and ensuring a somehow balanced society guided by the Rule of Law.