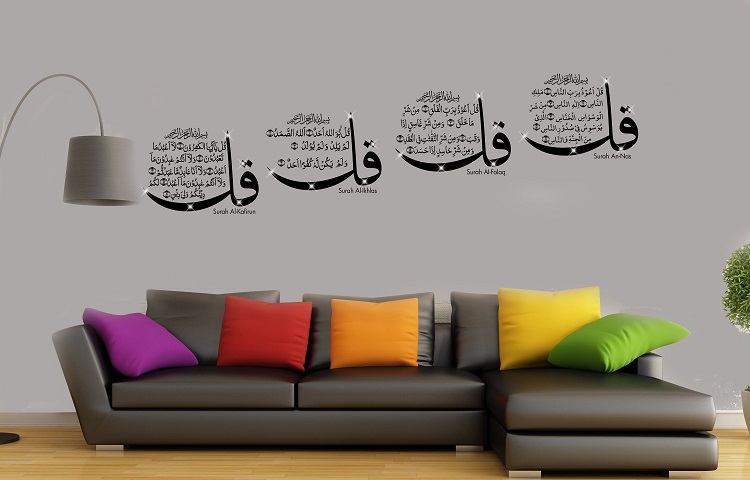 Are you looking to shop for Muslim wall art? That’s not really a surprise as the tradition of Islamic wall art décor has stood the test of time, and has really no parallel. In it, verses and chapters from the Holy Quran are written, painted, printed or engraved in calligraphy for display on the walls of monuments, buildings and homes.

The primary aspect of Islamic art wall décor is Arabic calligraphy, which got a lease of life after the establishment of Islam as the primary religion in the Arabian peninsula. As Islam forbids human and animal imagery, the walls of monuments had on them verses of the Quran engraved in calligraphy.

Calligraphy, which means beautiful handwriting, became the primary type of wall art in Muslim-ruled dynasties, from the Ottoman empire in the Middle East to the Mughal kingdom in the Indian subcontinent. From the Sultan Ahmet Mosqu in Istanbul, Turkey, to the Taj Mahal in Agra, India, the most famous Muslim monuments have on their walls Quranic verses engraved in artistic styles.

It also was a boon to the artists that the Arabic script was suitable for the art of calligraphy. Replete with loops, curves, dots, diacritical marks, Arabic renders itself naturally to calligraphy –  especially its letters that can be split to less than half their size and blended seamlessly with other letters.

As Muslims conquered vast swathes of the globe, they hired skilled artists to display on the walls of their monuments and buildings Islamic calligraphy art. The artists would also paint/carve/stich verses on handicrafts like ceramics, wooden artefacts and wall rugs. Calligraphers were also hired to pen court scrolls.

In each region, a unique style of Arabic calligraphy emerged. The straight, angular Kufic style developed in Kufa, Iraq; the decorative and intricate Diwani font took off in Ottoman Turkey; the figurative Tughra form thrived in parts of India.

As European colonialists conquered Muslim-ruled territories, Arabic calligraphy went on a wane, but made a swift comeback when new independent nations emerged after the Second World War.

There has been a recent spurt in interest in Arabic calligraphy on account of the online revolution particularly in e-commerce markets. From historical buildings, Arabic calligraphy now finds itself in modern apartments. Due to digital technology, e-commerce, and the rising income of the middle class, Islamic calligraphy is seeing a rise as ‘Muslim wall art’. In this age, many digital stores are there from where one can purchase Islamic art wall décor in varied forms – low-price wall decals, affordable digital prints on canvas or paper, and stainless steel frames. New-age artists and curators now market their works of art on social media too, with offers of making bespoke works too.

English translations are now increasingly becoming a part of Muslim wall art because as a good eighty per cent of the world’s Muslims are not native Arabic speakers. This introduction of English in Islamic art wall décor is therefore noteworthy, and part of the spectrum of changes in this field among which include the scale, the accessibility and the diverse profiles of buyers.